ADVENTurous is an open submission exhibition exploring the christmas narrative, which we're staging in 3 UK venues during advent this year : at Engedi in Colwyn Bay, Leftbank in Leeds and the Union Chapel in Islington, London.
The work exhibited at Union Chapel will also be part of the one-day ‘ADVENTurous' conference, hosted by Greenbelt Festival and partners.
On this blog we'll be posting regular updates about how plans for the Leftbank Leeds show are progressing, with information about the contributing artists, and possibly some previews of the work being created for the exhibition... 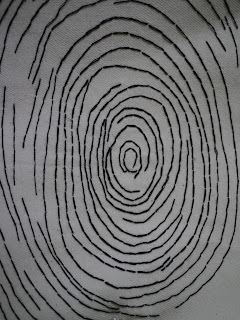 LB: Welcome to ADVENTurous  - I know you have a special connection with Left Bank …

SH: My first connection with Left Bank was through the Revive church community before I moved to London in 2005.  At that time, the building had been empty for about 10 years had a leaky roof, no water or power and basically become a squat for pigeons. Over the next few years many of my friends back home set to work at clearing the building (and the pigeons) and pulling funding together to get a roof on the place again.

My real love of the building was confirmed when I was invited to a wedding there in 2007.  Fortunately it didn't rain that day as there were still holes in the roof and we were told to wrap up warm as there was no power or heating.  It was a truly lovely service and I somehow knew I would have more involvement in the Left Bank future but in what way I wasn't sure.

I love the fact that from the outside Left Bank  looks rather like a massive red brick shed (sorry LB lovers) but then when you walk in it has these almost majestic qualities - like the way the light and shadows are cast through the timeless simplicity of the large, leaded window above the entrance.

So, despite living over 200 miles away  - when it came to getting married in 2009 and me being a Leeds lass meant that Left Bank was natural choice for us.  We wanted a venue that could offer the flexibility of a Christian focused service along with a space where we could have a great big party with a live band. For us it was a way to breath even more creative life into the building and for others to see the potential of the space.

So a team of family and friends all descended on Left Bank with what can only be termed as a look of despair as we set to clean it up.  Not one of them could see how we were going to make a wedding happen in just s few days time - but they did have faith in my creative vision so under careful and sometime stressful instructions the team set to work.

Fortunately, my dad was able to help us install some temporary lighting and heating which as least created some hope for the set up team and of course stopped them from perishing in the process. We dressed it with hundreds of recycled fabric flowers, which had all been made by family, friends and myself.  We commissioned a friend to make a backdrop art piece for our bar area and hired in all manner of bits and bobs to make it all happen. Not least the amazing lighting and of course turbo charged heaters.

It was a really cooperative event and lots of our guests took pride in the bits they had contributed to make happen, we even had LB incorporated into our invites.  Not least because we wanted guests to have an image of the place as we asked that if they were planning to offer gifts they might consider giving donations instead to replace the leaded widow above the main entrance, which has now been completed. 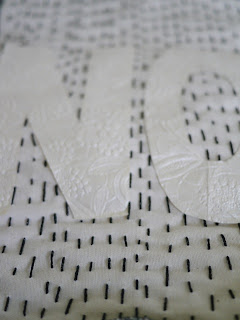 LB:  And now you have returned!  Could you tell us something about what you’ve been doing since your wedding?

SH: I gave up work a couple of years ago to do Visual Arts Foundation course which I finally finished March 2012 - having had a baby in between!  My specialist areas were textiles and ceramics. So I'm aiming to draw on some of my textile experience to pull my ADENTurous piece together.  It will be a body of work collated to create a large wall mounted mixed media piece.  Essentially, it’s a wall calendar, a contemporary  Advent calendar if you like. But instead of the normal nativity and snow men scenes I'm looking at the symbols and narrative of the Advent period using contemporary icons, pattern and form hopefully creating something which is less literal in my imagery yet still taking my inspiration from Biblical and Christian text.

I have used a range of traditional and modern sewing and printing techniques to give contrast and definition to the finished piece along with recycling materials where I could.

LB: I know you are mum to a toddler! Has it been a lot of work to create your submission for Adventurous? It must have been very labour intensive given the fact that you have used a range of different techniques to create each date of the Advent period?

SH: Our little boy is almost two and is very active so I can’t say it’s been easy to work consistently or at the level I would have liked to on this piece. While I am only making one final piece its actually made up of lots of smaller individual pieces.

I moved house recently and I have gained a space to use as a studio above where I live so when time allows this has made things slightly easier  - especially in relation to the safety aspects of pins and needles lying around! I have also had some amazing support from my in laws, in particular my mother in law who loves crafting, so she has done some of the labour intensive embroidery.

Left Bank:  What made you interpret the theme using mixed media – different sewing techniques, printing and so on? (I had a look at your sketches and think
it’s going to be beautiful).  I like that you are using some traditional handicraft techniques (sewing for example) to make a contemporary artwork…

SH: If I am honest I was a bit worried about how I could contribute in a 2D way as generally I work more sculpturally.  Then while watching a film called ‘Le Herisson’  (The Hedgehog) I found my inspiration.  One of the characters was using some quite linear imagery as she counted down the days to meet her fate. This got me thinking about calendars and I kind of felt there was an association to be made as the whole Advent period is about the count down to the coming of Christ.  So I thought that a wall calendar with a contemporary twist might just work as a concept and of course gave me a tangible way of working two dimensionally.

Given that I’m not a painter, I thought the only way to execute this piece was to use mediums I am more familiar with, in the main this being textiles.  However,  I wanted to present my work with texture and layers so it felt appropriate to use a range of traditional and modern techniques.

Looking at the process of presenting the work I have made a giant textured wall calendar  - which was both suitable for the space [Left Bank] and allows visitors to the exhibition to get a view from a distance and close up where some the finer details can be explored.  Rather like a large painting I guess.

The problems I’ve faced are linked to the amount of time it takes (some panels have taken between 6-10 hours) make each piece out due to techniques used e.g. embroidery.  The fact that I’ve had 42 individual images to complete has been a massive challenge and one I have toyed with reducing by sticking to the 25 day Advent period.  But my conscience kept telling me that all [wall] calendars have the tail end of the previous month and start of the next on them so I should indeed keep it that way.  This is why I have kept the narrative of those panels simple except for maybe 6th January.

I have used a range of embroidery, hand and machine stitches, along with fabric pens, paints and embossing powders.  I have also used more modern processes which involve printing with heat transfer materials such as inks (used over photocopied images of my own drawings/photocopied and typed text and sealed on to fabric at high temperature between Teflon sheets) I have also used transfer paper which can be printed on directly from my home printer then ironed on to the fabric – of course with this you have to remember that any text needs to be in reverse.  See if you can spot any that isn’t!!!!

For this reason I have had to think very carefully about how to deliver the finished piece – lets just hope that my plans work out as I’ve never sent anything this big in the post before – but  apparently you can even mail a rhino so it should be possible!

Left Bank:  How does it feel to be exhibiting at Left Bank having been married there?  You must feel very much part of the space!

SH: It’s an honour but it has been an immense challenge at the same time.  I have never exhibited since I was a student.  I think my family and friends are looking forward to seeing the building again just as much as they are to seeing my finished work. 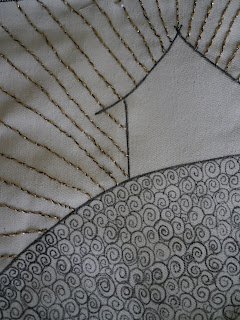 Left Bank Are you working on anything else at the moment?

SH: I’m working on an application to do an artist’s residency in London next year and other than that  that I need to really start refocusing on development of my business – sew-fun.com (website still in development).

Sew Fun is all about making fun things from textiles – whichI have just been selling at festivals where I run creative family friendly workshops.  However, I want to take this forward to develop workshops for children and parents to work creatively together with a view to developing communication, language and creativity. 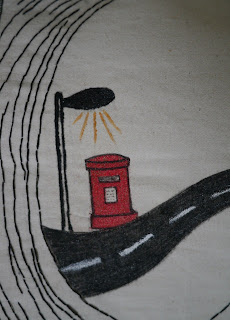 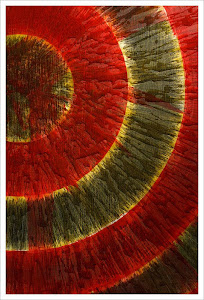